The biggest pro when it comes to cat nail caps is that they are completely safe to use on pets.

They aren’t going to hurt your cat in any way, unlike a declawing procedure would.

On the other hand, cat nail caps can hinder your pet’s ability to climb or play normally, and they can feel more or less uncomfortable while wearing them.

Nail caps also have to be maintained or replaced regularly.

Cat nail caps are much better than other alternatives however, this doesn’t mean that your pet is not going to inflict damage on your couches or carpets.

Cat nail caps have other disadvantages, such as the fact that they might not be as easy to put on if your pet is particularly sensitive about having their paws touched.

Also, it can take a bit of time for your cat to get used to them and walk normally, which can be uncomfortable for them.

Another aspect that needs to be considered is that they are manufactured from plastic .

This makes them anything but friendly to the environment.

In fact, the plastic used in such tiny items is rarely biodegradable or recyclable.

If they really don’t feel at ease, some cats might do their best to try and chew the caps off of their nails. 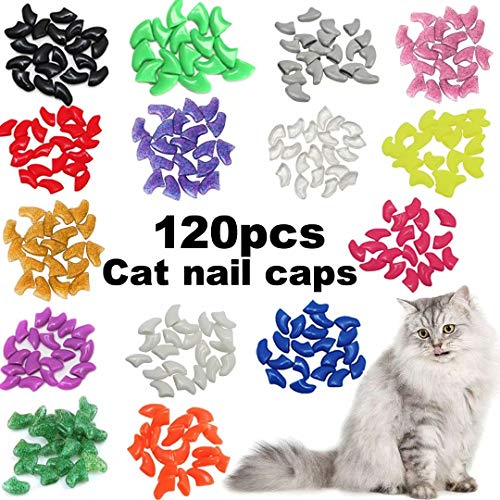 As you can imagine, this means that your pet could accidentally ingest one or two plastic caps, which can cause choking or intestinal blockage, leading to both of you ending up at the animal hospital.

Cat nail caps are recommended only for indoor cats, not outdoor ones.

The reason for this is that since they can affect their climbing ability, they can also make it more difficult for them to defend in case of an attack from another animal.

No, cat nail caps are not cruel in any way.

However, they have to be used on pets that accept them.

Some cats can have a truly hard time getting adjusted to them to the point that they can affect their behaviour on the whole.

If you can’t see your cat handling this mishap for a couple of days until they get used to the caps, you might want to take them off.

There is one aspect that needs to be pointed out and it’s that about four to six weeks after you’ve placed them on your cat’s nails, the caps are going to begin curving and will affect your cat’s gait.

When the pads end up hurting your cat’s paw, they will obviously be in some pain and might not even want to walk around.

Around that time, they have to be clipped.

Do They Hurt Cats?

Besides a minor inconvenience in the form of mild discomfort during the first few days following the application, no.

Whether the nail caps are accepted by your cat or not depends on their personality.

Some have no issue with nail caps whatsoever but others will be severely aggravated by them.

However, if you own a cat that also goes outdoors, putting caps on its nails can be detrimental to its health.

However every animal is different, so if your cat feels like the caps are hindering its normal life, they might be less inclined to climb.

This is rarely a disadvantage as cats tend to get used to their nail caps in a timely fashion.

And while they might not be able to climb the stairs for a couple of days, they will definitely use their other feline assets, such as precise jumping.

1. Great for your home

The first and obvious pro of cat nail caps is that thanks to them, your furniture and carpets are not going to sustain the same damage.

However, they make it very difficult for the cat to actually inflict any damage on these surfaces.

2. Great for your skin

Some cats can be rougher than others, whether in play or as a part of their normal behaviour.

But an aggressive cat can be very hard to handle, and not only will they not surrender to your will, but they will also try to scratch or bite you in an attempt to defend themselves.

A great pro of nail caps is that your cat is not going to be able to scratch you.

They might try, but there isn’t going to be an injury.

Depending on the country you live in, you might find that a whole set of nail caps can set you back around ten to twenty dollars or pounds.

Lots of things can be said about cat nail caps, but the fact that they are expensive is not going to be one of them.

If you make sure to remove it when your cat’s nails grow enough, the caps are not going to affect your pet’s body in any detrimental way.

If you compare that to a declawing operation, nail caps are better in every possible way.

5. They last for one month or more

Not only do they not cost a fortune, but nail caps actually have to be replaced when your cat’s nails grow enough.

This can take 3-4 weeks for some pets but it can take up to 6 weeks for others.

How to Apply Cat Nail Caps

Before you even think of applying them to your cat, if you have no prior experience with the procedure, it might be a better idea to ask your vet or someone that has tried this before.

1. Make sure your cat is in a good mood

It is extremely important to avoid tending to the entire procedure when your cat is stressed.

On the other hand, if your cat tends to be very quiet when she’s brought to the animal hospital (because she tends to be scared), that moment might be the best one for putting the nail caps on.

Putting the nail caps on your own can be a true challenge, whether your cat might exhibit aggression or not.

In any case, they will try to run away and hide, making it impossible for you to use the nail caps sometimes even for several hours.

Ask a friend or a family member to help you with restraining the cat as you are fitting the nail caps on.

With your ‘assistant’, you can grab a towel and wrap it around your cat’s body much like you’d hold a very young baby.

A towel or a small blanket can be of great help and can also make it possible for you to gain access to your cat’s paws without sustaining any damage yourself.

4. Fill every cap with glue

Nail caps come with different instructions, but this is a general rule that applies to most of them.

Fill each cap with the glue provided in the box up to ⅓ of the way – do not fill it entirely with glue as a lot of it will be wasted and will also spill on your cat’s paw.

5. Putting the caps on your cat’s nails

Flex your cat’s joint by pressing on the metacarpal/metatarsal pad or right under the main fingers/toes.

Fasten the cap onto the nail and then wait for a couple of seconds to make sure that the glue has stuck to it.

6. Keep your cat under observation for 10 minutes

There is a small period of time during which the glue needs to correctly thicken and adhere to your cat’s nail.

So if you let your cat go and do whatever they want right after the entire procedure, the likelihood of them trying to take the caps off their nails is very high.

But the problem with this is not that they might manage to do it, but rather that they might pull the caps with their teeth so hard that they could actually damage their nail, but also their finger.

So try to keep your cat calm for as long as possible until she settles down for a bit and until the glue is done drying completely.

It depends on whether or not they offer this service.

That means that they are not going to fit nail caps on your cat simply because it is not their specialty.

However, a larger animal hospital where grooming services are regularly provided is the best place to go to.

There, you’re likely to come across a veterinarian or a vet technician to help with the process and also show you how you can do it yourself in the future.

How Much Does it Cost to Cap Cat Claws?

The nail caps themselves are going to set you back anything between $15 and $20 depending on the model (11 to 15 British Pounds).

As for the procedure itself, it might be slightly more expensive compared to what groomers or vets charge when trimming your cat’s nails. That means another $15 to $20.

Are Cat Nail Caps Better Than Getting Your Cat Declawed?

Yes. Cat nail caps are much better than a declawing operation in every possible way.

In fact, declawing cats is now considered torture and most vets vehemently refuse to perform the surgery.

It is a cruel operation that tends to leave severe marks on the cat’s personality and behaviour.

The procedure itself is not normal as it involves cutting some tendons located right above the fingers so as to make it impossible for cats to claw at anything again.

If you really have a problem with your cat clawing at everything in your home, use cat nail caps. Why Is My Cat Acting Weird After Flea Treatment?